Going to Tyrolean Alps in Summer with a 7 months old baby is like walking into a morning bakery while on detox. It almost physically hurts – the amount of things you wish you could do, but can’t, unless you do baby shifts, but then it would mean you’d do them alone and that’s not the same. Full day hiking, paragliding, mountain biking… Ok, let’s stop at hiking, because let’s be honest, the latter two I never did nor fancy anyway.

Warning, the post below contains 20+ stunning photos taken by Anton. They might cause a dream-like state of longing to be in the forest and what is known to scientists as Suh-suh-sumertime sadness. I warned you. 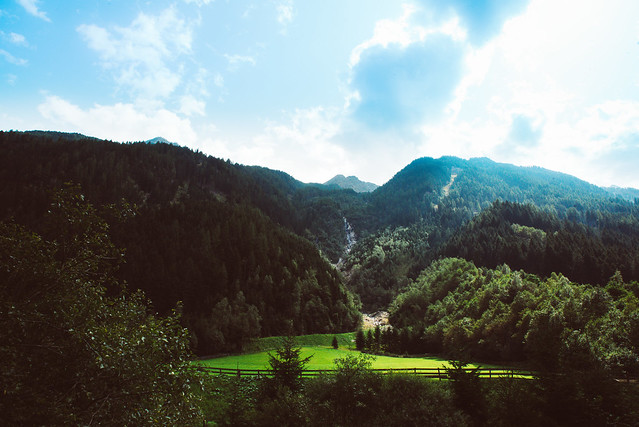 Tyrolean Alps have an amazing hiking ecosystem – trails of all kinds of difficulty, duration, type and interest. And Geocaching. If you are scratching your head in an “Eh, what’s Geocaching”, it’s a new hobby Anton and I picked up. Gets you out of the door. It’s like a treasure hunt, but better. If you know what it is, good for you, check out the scale of it in the valley:

I chose that valley because there was a convenient 1h 20m flight from Amsterdam to Innsbruck that worked for Mira’s nap. See this post about my craze about the first trip with the baby. And the hotel was a 30 minute drive from the airport, the transfer was included in the room price and they even had a baby car seat!

We stayed a little further away from the village, but luckily, the hotel was part of a Summer deal called Summer Stubai – it’s a pass that gives you free transportation around the valley (and to and from Innsbruck), one free ride a day up and down each ski lift in the valley and a few more things we didn’t use. It’s a soft card with your name on it, you scan it on all ticket counters and they let you in. I tucked it under my phone case and it was very convenient. Here, I took a photo of it (having one of those influencer moments): 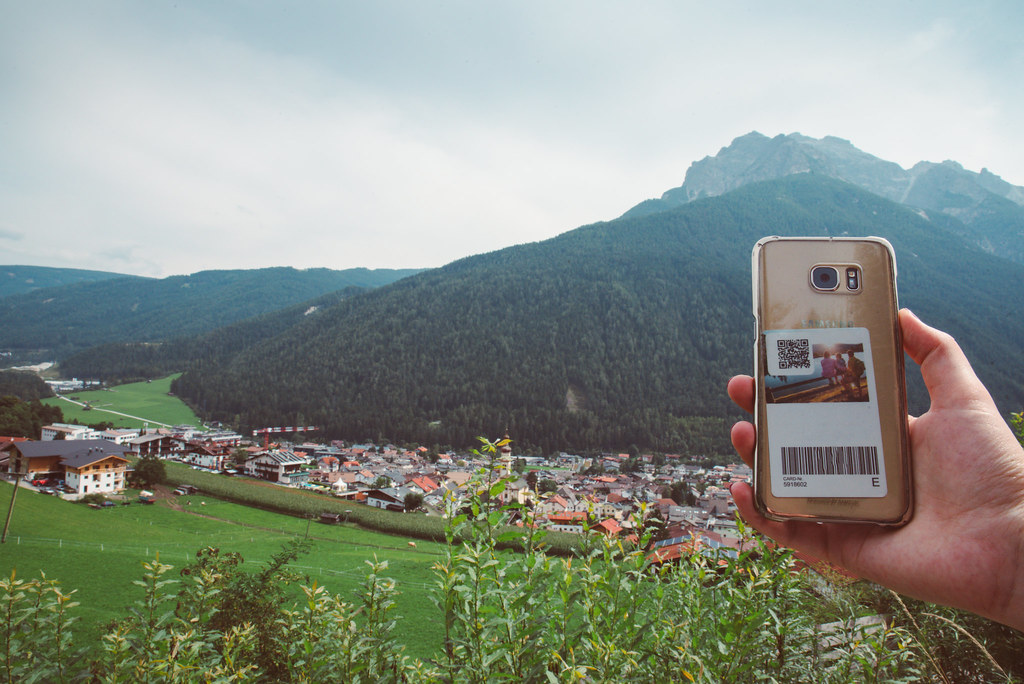 Ok, about the ski lifts and hiking now.

Schlick 2000 would be a great name for the spaceship, or a vacuum cleaner that you can only get from door to door salesmen, but no. It’s a ski lift in the Stubai valley. It has a middle station you need to change lifts at if you want to go all the way up. We went up once when there weather was nice. Going up, checking out the viewpoint, going half way down and hiking to the foot of the mountain must have taken about 4 hours. Worth every second of it, I’ll let the pictures do the talking. 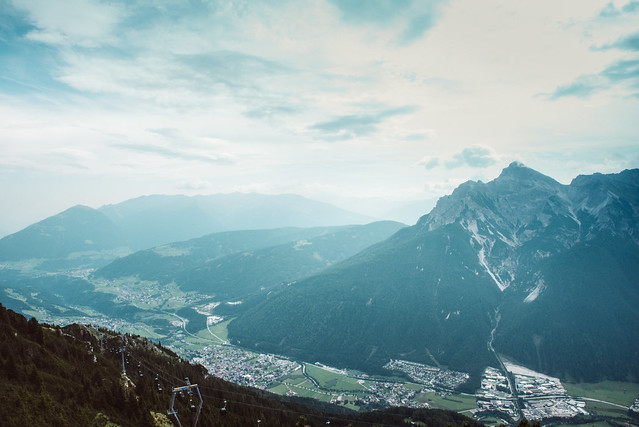 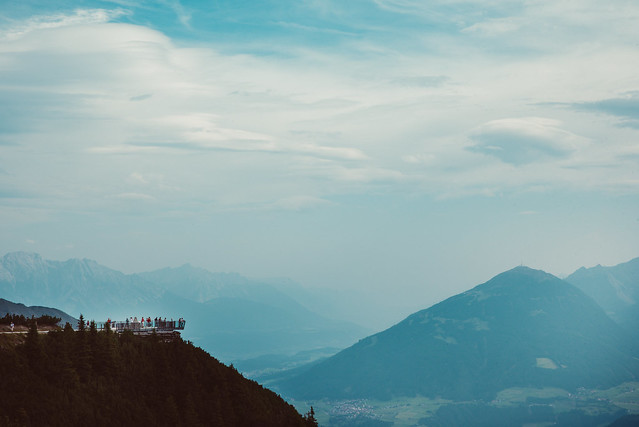 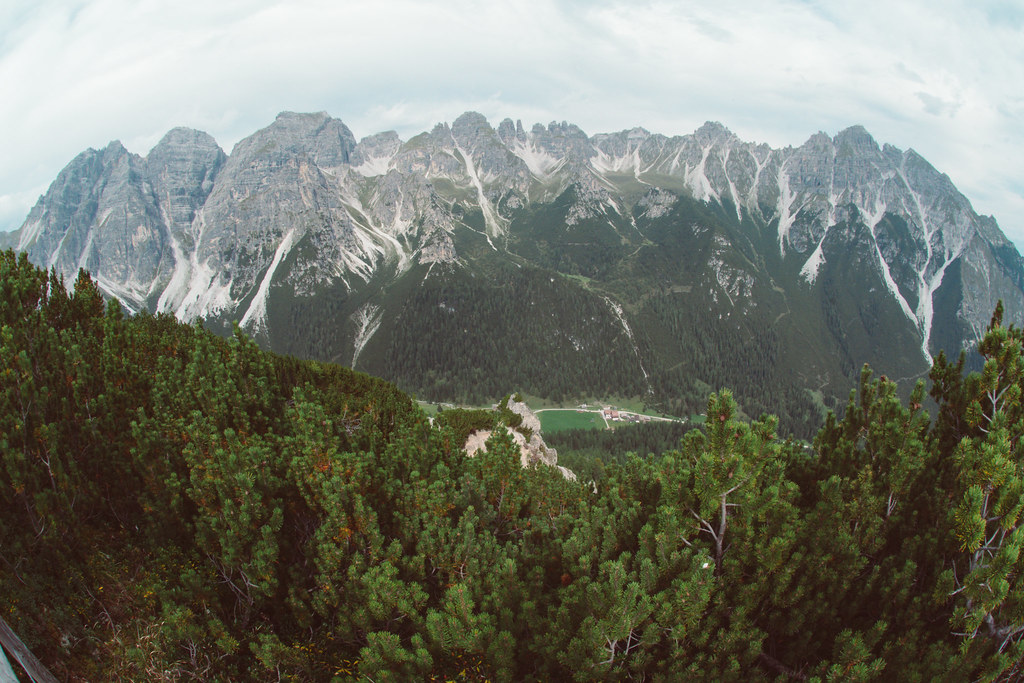 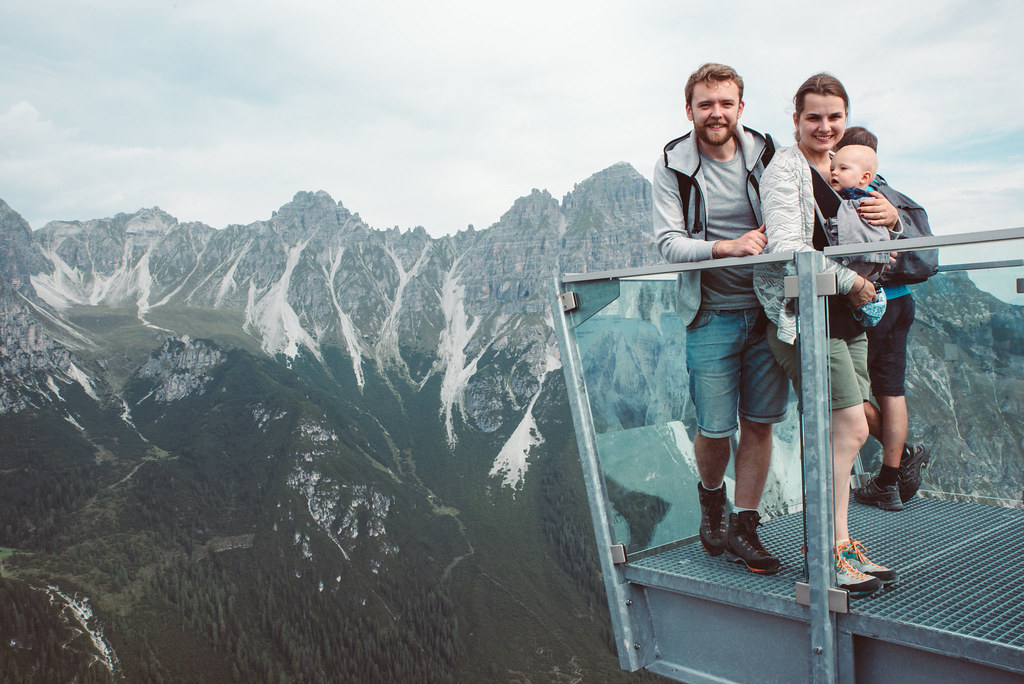 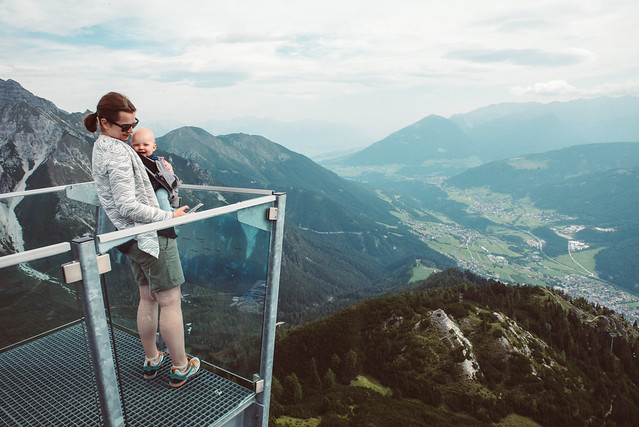 Look at that giggly baby. All grandmas were ours, we left them passed out of cuteness, in puddles of ‘awwww, is that a baaaaaaby?’, figuratively speaking.

Mira napped like a champ, we carried her in a baby carrier and she would usually doze off as we walked or on the lift. I was worried her ears might pop, but she did absolutely fine. All the air and movement helped her sleep and wake up a happy baby: 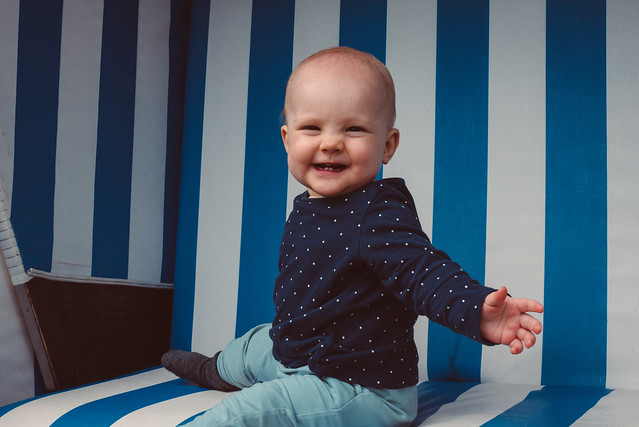 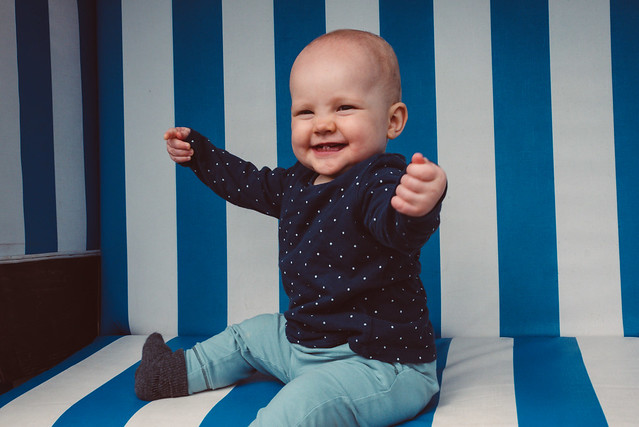 Because I was breastfeeding and she hasn’t started solids full on, feeding was easy. We tried to go out in the morning following her rhythm of naps and feeds, so we’d leave after breakfast, she’d nap on the way (most of the things were at least 20 minutes away by bus) or as we got out of the bus. Then we’d get an hour or so “free time” and then she’d wake up and we’d show her around. 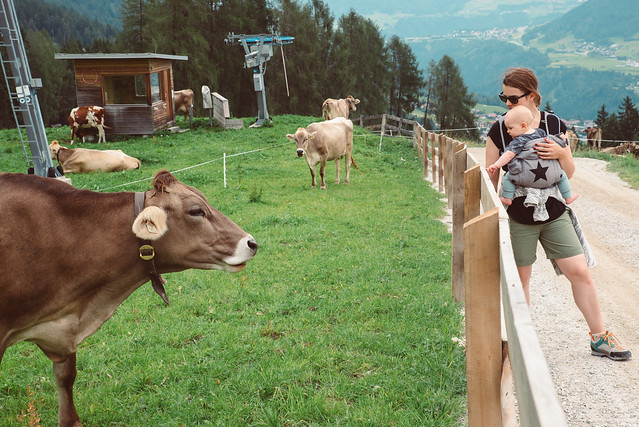 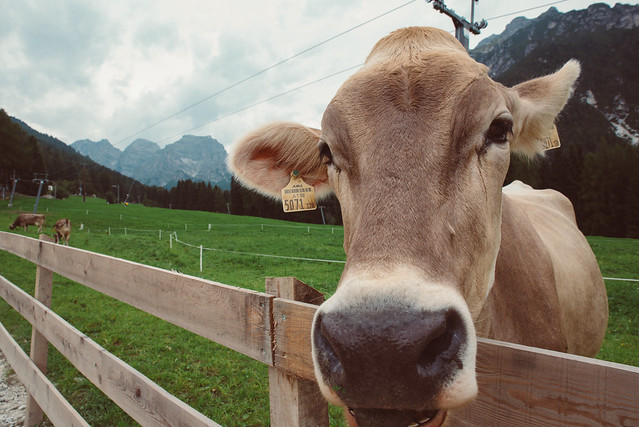 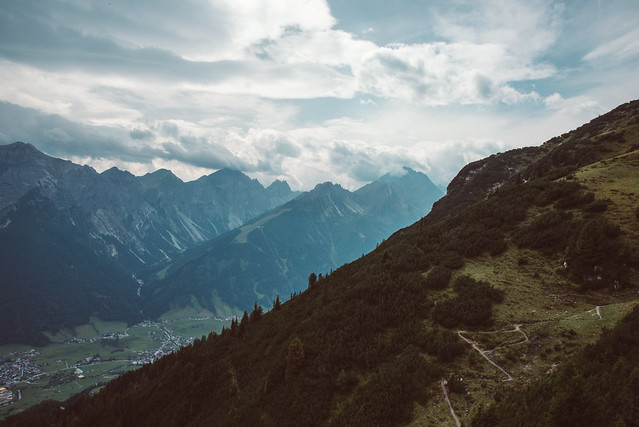 She’d usually get tired soon after and would fall asleep in the carrier again. We’d let her roam around at the hotel after that nap. This is on the way down from the middle station of Schlick 2000. You can imagine the trail of melted grandmas we left along the way. 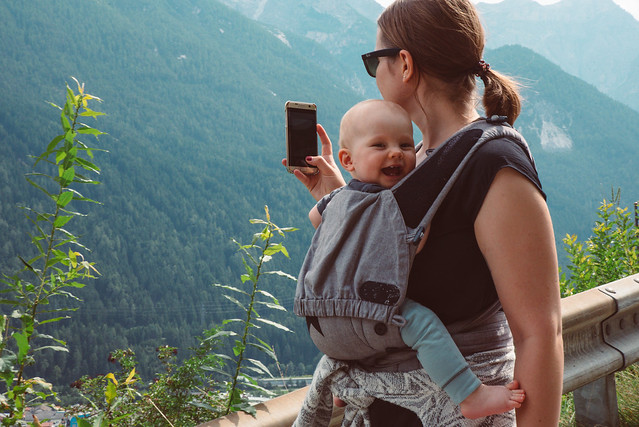 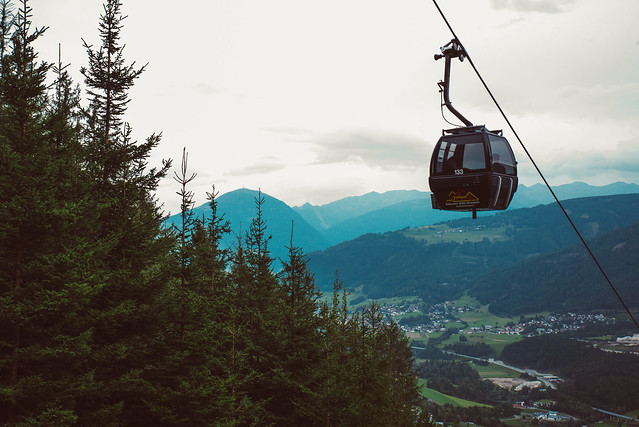 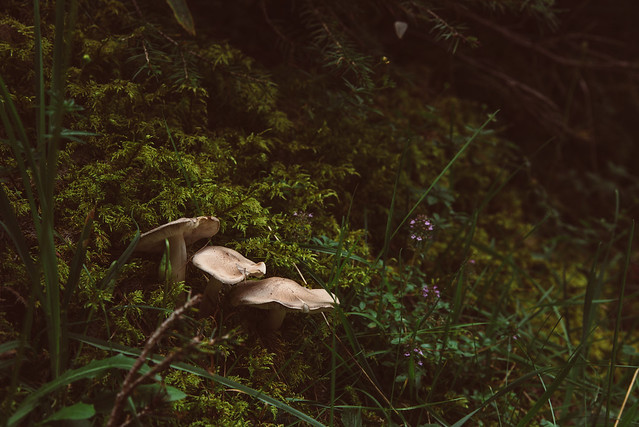 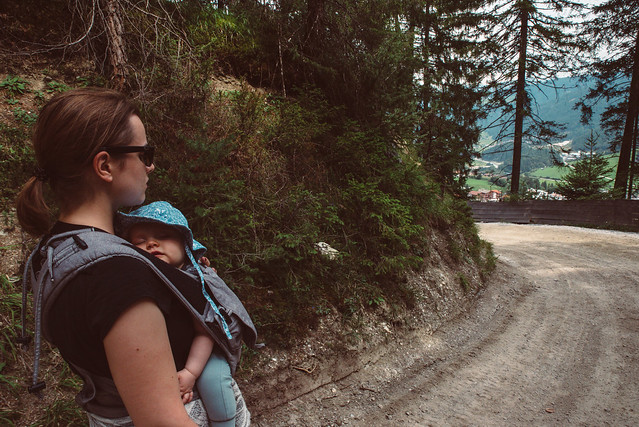 Elfer Lifte is another ski lift, closer to the village of Neustift. It’s famous for paragliding – it’s a very popular activity there in Summer. The top of the mountain, at least, where the lift goes, has an impressive futuristic sundial with a well-hidden geocache in it. 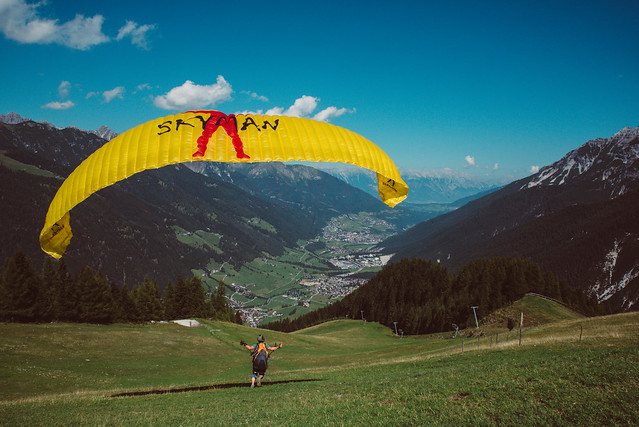 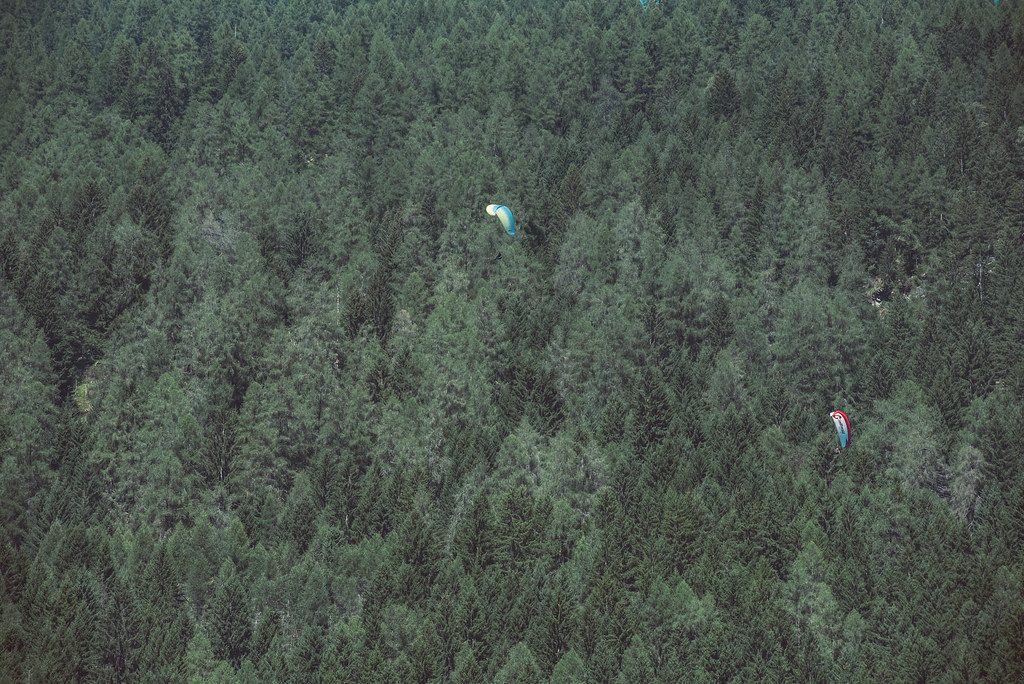 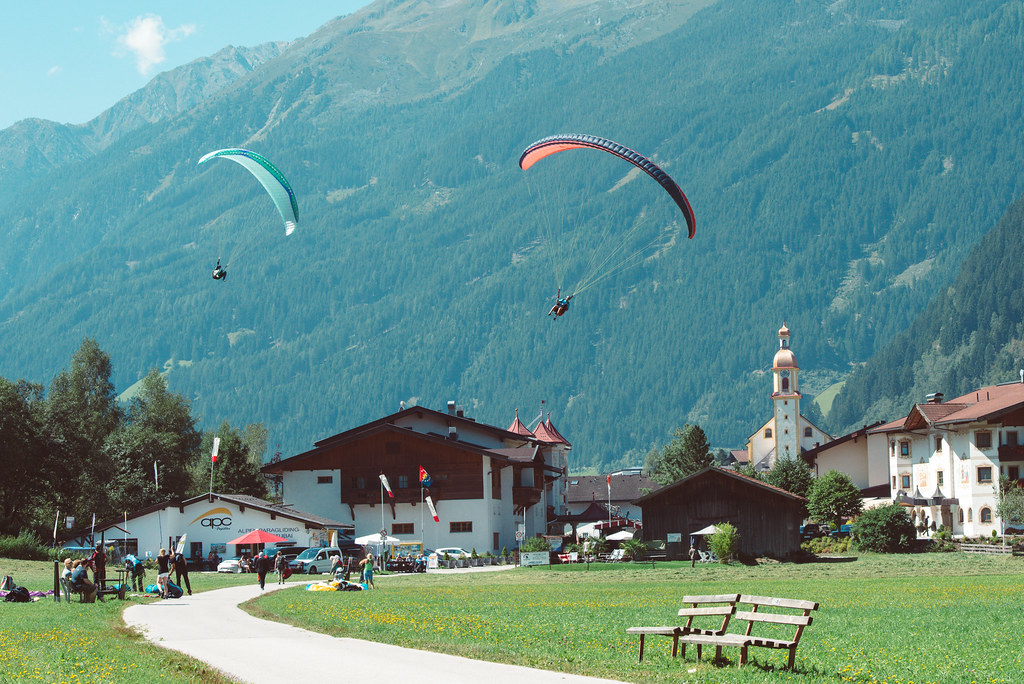 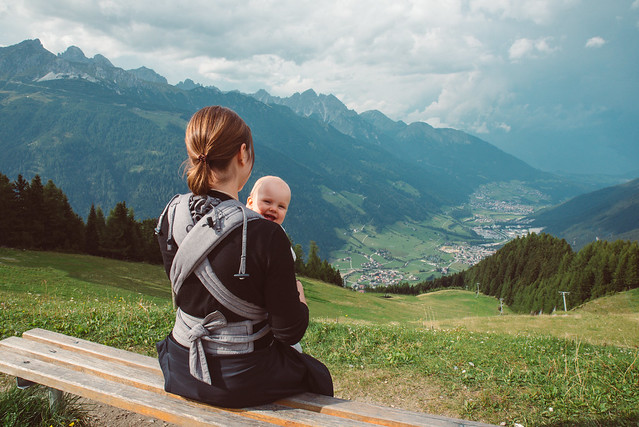 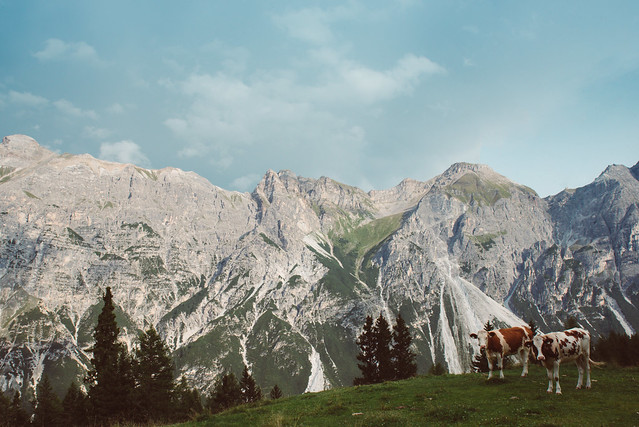 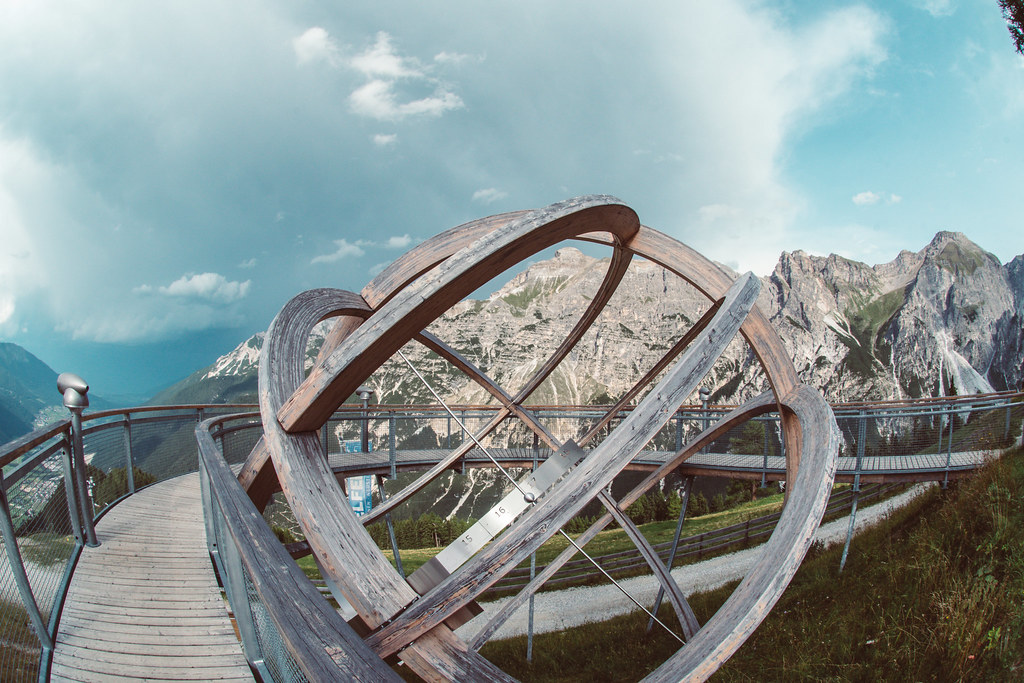 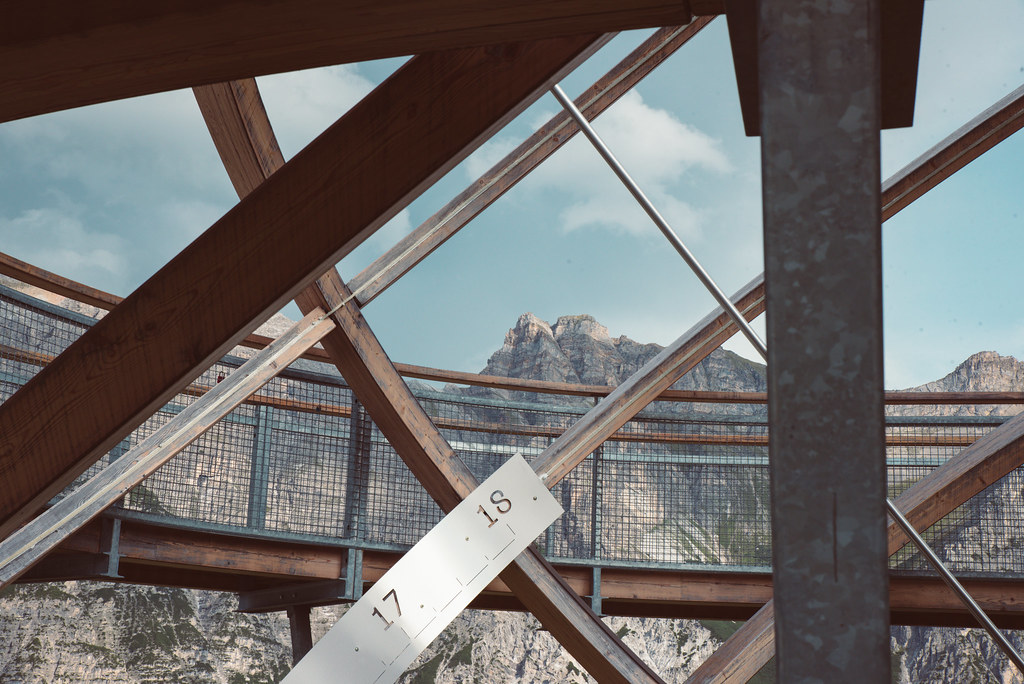 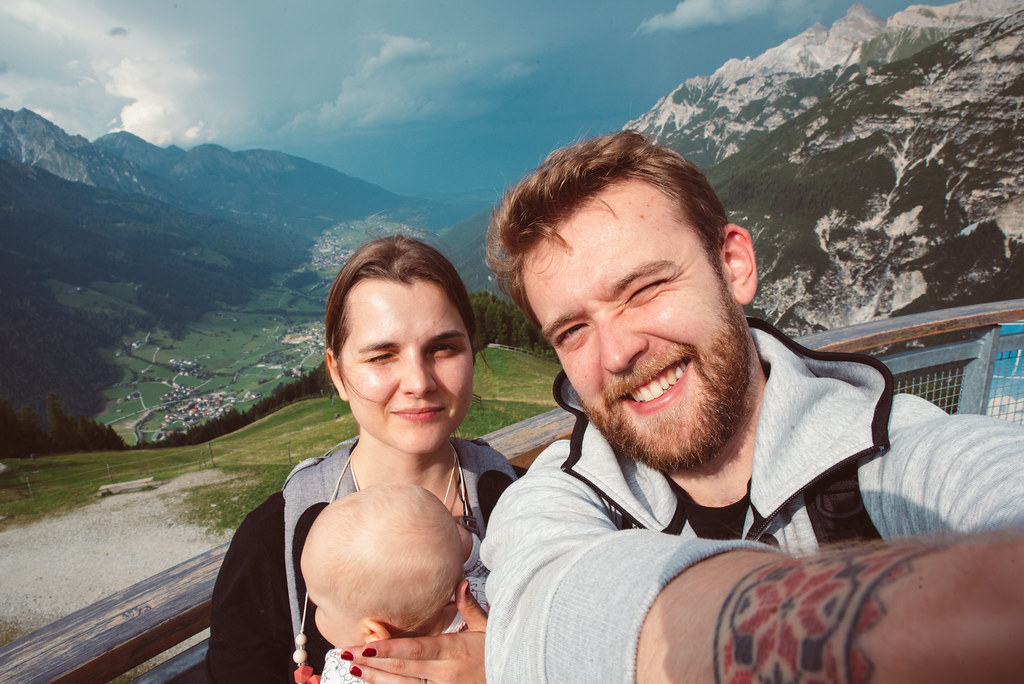 Here is a thriller, a tribute to the most irresponsible parents and people who forgot how to travel: yours truly and her partner in crime. People who didn’t read instructions, ignored the siren and only then, at 5:05pm realised the lift closes at 5 (see above, on that picture, they are smiling at the sun, not aware of a 6km downward hike they’re about to embark at). Read more in the photo below (scroll right for more photos):

This story is about our first hike with Mira: we took a cable car up the mountain, went around and tried to capture the breathtaking views, went to see what's further up, were rewarded by those pretty models, heard a sirrn-like buzz, ignored it, returned to the cable cart to find out the last one left 6 minutes ago, re-surfaced my long forgotten German, enough to understand the keeper won't be taking us down in the very last cart with him and that the only way down is hiking 6km, Mira slept through most of it, then,l the rain started and a godsend of a man on a truck came by and offered us a ride down, the rain was pouring all the ride and stopped for 10 minutes, perfectly timed so we walked to the bus stop and the next bus was in 2 minutes and the one after that was in 30 (!). So if this is not a sign, I don't know what is. The end! #tirolalps #neustiftimstubaital #mountaincows #landscapephotography #showMiratheworld #photographeratwork

Tips for going in the mountains in Summer

Now to business. You wouldn’t think I’d let you go without some useful tips, would you?

Well, this was my first trip to the mountains in Summer and I had no idea what to pack. I also thought this would be a paved lo-key hiking area for the elderly, so we took the stroller and didn’t pack hiking boots. Guess what, we bought the boots on the second day and used the stroller twice: once to let Mira sleep after the ride from the airport and the other time in the hotel to stroll 50 meters to dinner. Amateurs.

So here’s what I wish I knew back then before going: 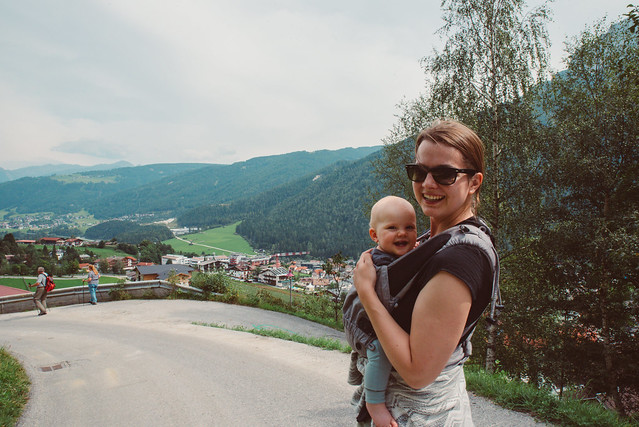 First trip with the baby

Hi, I'm Olha and this is my blog where I write about my travels and share some very personal stories once in a while.
Read More...